The Call of Duty Community

Should sprint be added to the Rifles server?

Kraken / May 26, 2017 / General
I'm back and am fixing stuff on the site. I'm mostly here to fix things and release the CoD2 mod. I will be fixing the Jump server first because I think there are still issues with it. Then I will be releasing the new mod that you have all been waiting for. Just need to update the rankings logic and maybe enable autosave. Recruitment will start back up again as well. TS is back, so hop on if you want to chat. Peace!
0 Comments 0 Likes
Share

Kraken / Dec 08, 2016
So as many of you know, CrazyCoder left for another clan due to my crazy schedule and increased interest in other games / decreased interest in COD. And my schedule has gotten even crazierrr btw. Anywho, I'm sure there are people who are wondering what is going on...

I have just slightly lost interest in CoD1/2, but not permanently by any means. I think taking on the CoD2 mod burned me out a little. That being said it's still 95% done and I fully intend to release it! Just gotta be patient with me :)

The community may not be active but I am not giving up on it yet. All servers will remain online, although I know some of them are very buggy. They're all setup to stop and start nightly so if I'm not around, rifles for instance is still accessible.

I hope everyone is doing great, have a great holiday season :)

Kraken / Sep 05, 2016 / Server
You may be wondering, "why isn't anyone on CoD1 lately"? Well, for the past week, I have been working on a new rifles only mod for CoD2 that will add on a lot of new features that our current mod does not have, including:


I'll also be changing up our rotation a bit. We'll be doing half TDM and half SD most likely. Hopefully, this mod will be ready for public beta by next weekend.

Heavy Weapons have arrived on the bots server! Three new weapons are available through the menu: NoobTube, Remington Shotgun, and Minigun. The Remington is a new addition and is great to play with. Also, you can now pick a secondary weapon from the opposing team! Get out there now and start owning some bots!

In addition, the SmartBot code was completely refactored and cleaned up, which should cause less server crashes and overall makes the mod much more stable. I'd like to thank Harbinger for the original bot code and Coder for adding in the shotgun.

With the bot mod finally being stable, the opportunities available for extending the mod seem endless, so expect more updates to come.
0 Comments 0 Likes
Share

I added a new feature called non-enlisted membership. For people that do not necessarily want to join the ranks, but want to be able to have a voice in the community, I have enabled them to apply for a Guest account. The process is similar to regular site applications. I updated the app form so people can specify if they are applying for CB membership or non-enlisted membership. Guest accounts can shout, vote in polls, send/receive PMs and get more forum access.

Also, I updated the site look and made a bunch of other changes, start looking around if you haven't already. We've received two new members this month - Fegelein and Blue (trialist) - and hope to be adding more to the roster soon. We will be active in CoD2 a lot more too so definitely get that game if you don't already have it.

P.S.: We are making a video soon, read here for more info.

Call of Duty 2 Server up and running! Finally got the CoD2 server fixed! It's all setup with PAM installed and rifles only. PAM is the mod we will be scrimming other teams with. However I will also be installing AWE some time soon so we can play on that as well. And then Merciless Mod V2 is coming out in August.

The server currently is using a SD rotation of some of the maps (Harbor, Carentan, etc).
2 Comments 1 Like
Share

But not as a clan - as a community. This means that there will be less heavy lifting on my part. Anyone can join, and the servers will go on indefinitely. We probably won't be playing in CS:GO much anymore, but will be playing in COD1 and potentially, COD2. Also, it won't be necessary to disband with a community, and by staying open we can recruit more people as time goes on.

So I've talked with James and Coder already, both who are happy to jump in. I hope older members also rejoin. You might have to resubmit an app to rejoin (I haven't figured that part out yet). James is working on getting a Teamspeak server again so we can chat on that. Lastly, I'm still making the necessary changes to the site, so it might look different day to day.

See you out on the battlefield!
2 Comments 2 Likes
Share

End of the Road

Lately I've noticed it's been hard for everyone (including myself sometimes) to make the events. We have a lot of things going on here. Some people are waiting for hardware upgrades to play again. Some people are too busy with work and/or school. And some people just forget.

However you want to call it, the activity of this clan is just flat-out dead, and I don't see any resurgence coming soon, so I must disband it, as it seems I am doing all this work, but no one can show up and enjoy it.

I'm not blaming anyone, it's just that the clan didn't turn out well, people had to stop playing for a bunch of reasons. Real life always should be in front of gaming and so, there's not much more to do here with so few active players. And without players it doesn't make sense for the clan to continue.

I want to say thanks to a number of people that were able to help out and keep the clan active:


The servers will stay up, for as long as I can afford - ESPECIALLY the CoD1 servers. The bot server has someone on it every hour, and the Dodgeball and Jump servers are going up in popularity. Rifles will stay up too since it doesn't cost extra to keep it up.

So we can still play, but events will be cancelled and I generally won't be doing any admin or clan owner work anymore. That includes recruitment (obviously), site maintenance, and some server maintenance.

Thanks everyone for joining and creating some fun memories. If you ever want to play, just ping me on Steam (STEAM_0:0:17469631).

-Paul
1 Comment 0 Likes
Share
Load More
Kraken: miss you guys :)
Kraken: and now I've revisited too. lol. maybe i'll bring the servers back someday, who knows.
Erehart: holy shit...the website is still up. So many memories with yall. Good ol' days
Kraken: I think the servers should be fixed now. Cleared up some space on the drives.
Kraken: What's up everyone? Rifle server is up, I just need to change the banner, but I'm lazy right now.
Kraken: Screenshots are up!
Kraken: For those still wondering - I'm still alive. Mod is 95% done. Will post screenshots soon.
Kraken: What's up guys! I will be back to COD starting this weekend. Can't wait to get this Cod2 mod in public beta for you all to see. Hope to see you on Cod1 this weekend.
CrazyCoder: CoD1 Rifles back up again
CrazyCoder: AA with cause gray screen so you can't see in-game. Change this in Options\Graphics
CrazyCoder: CoD2 Multiplayer must be ran as Trilenear filtering. Turn off AA and AF
Fegelein: The singleplayer works fine,and I like it.
Fegelein: I got CoD 2,but multiplayer won't start it goes to a black screen and I have to shut down my computer if I try to end the task.Anyway to fix this?
CrazyCoder: going to be more busy in real life. Going to still work with mm2 mod and on CB Rifles.
Fegelein: Just got CSGO
CrazyCoder: going to hop on TS later if your still online around 7-9pm eastern
Kraken: The people have spoken. I've put sprint on CoD1 Rifles (temporarily). If people like it we'll keep it.
Kraken: Will be streaming CoD1/CoD2 from time to time, so check out my channel https://www.twitch.tv/beastfable
Fegelein: nein
CrazyCoder: He must thing you mean mp_hurgent that sniper map.
You do not have permission to shout 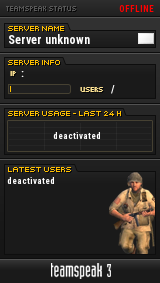